A 12-month project promoted throughout 2018 to help raise awareness and appreciation of the bassoon, and to inspire and encourage more young musicians to take up the instrument. 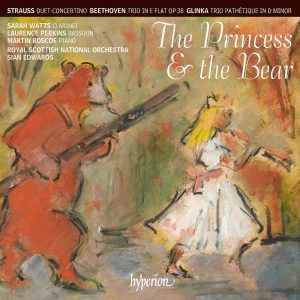 The Princess and the Bear

This recording can be pre-ordered as a download on iTunes or as a CD from Hyperion - please click the appropriate links.

Released in the month of Leonard Bernstein’s 100th birthday, here is a celebration of some of his best-known music - and with a special link as well! For this recording of four songs from West Side Story (made in April 2018 in Hampshire, U.K.), Laurence teamed up with pianist Yoshiko Endo who plays a Baldwin grand piano that once belonged to Bernstein. Its warm but clear sound is perfectly suited to this music. The wonderfully vocal qualities of the bassoon’s sound is eminently suitable to this great music in the excellent performing edition by David J Elliot (published by Boosey and Hawkes, recorded here with the permission of the copyright owners).

BUY IT NOW - all four audio tracks - on CDBaby (click here) for just $2.99* and support the Year of the Bassoon project.

* Roughly £2.35 or 2.65 Euros. This recording will also appear shortly on iTunes, Google Play and Amazon download, but prices may be higher. 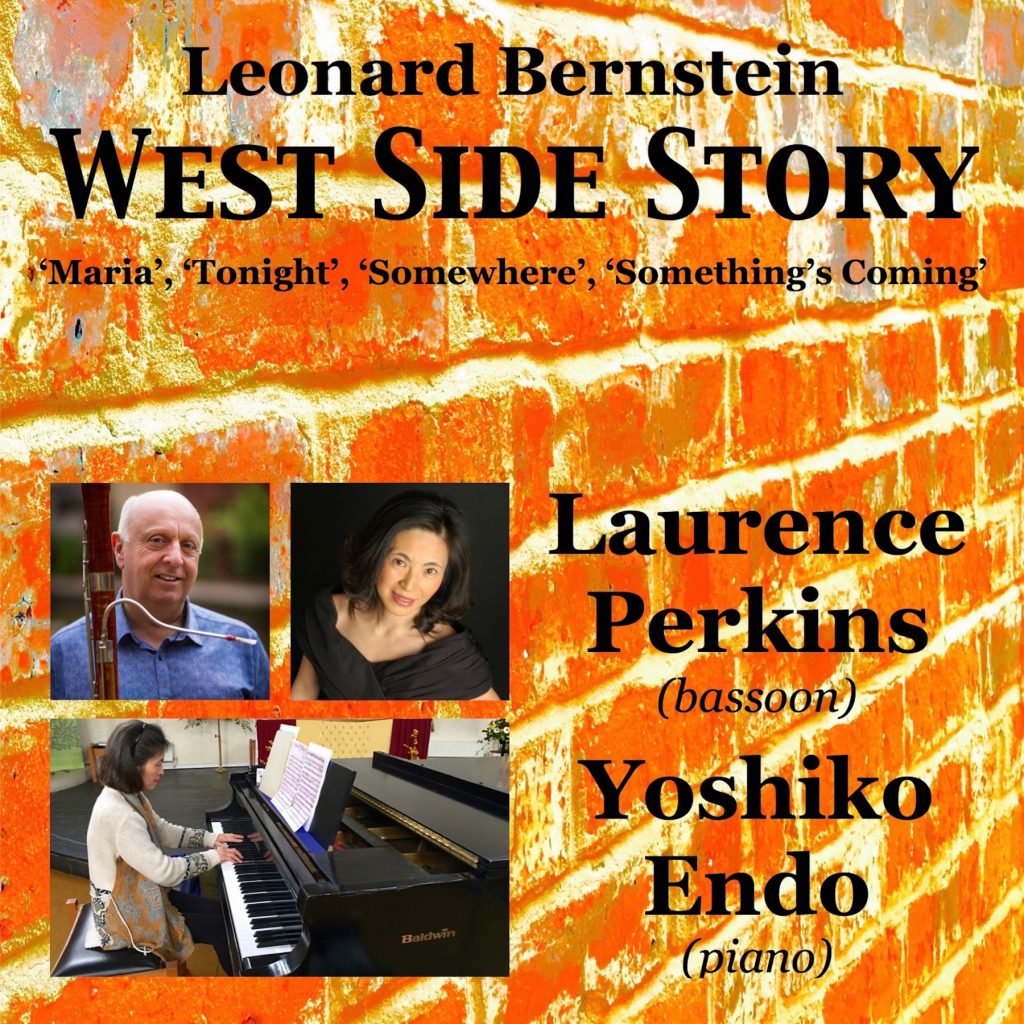 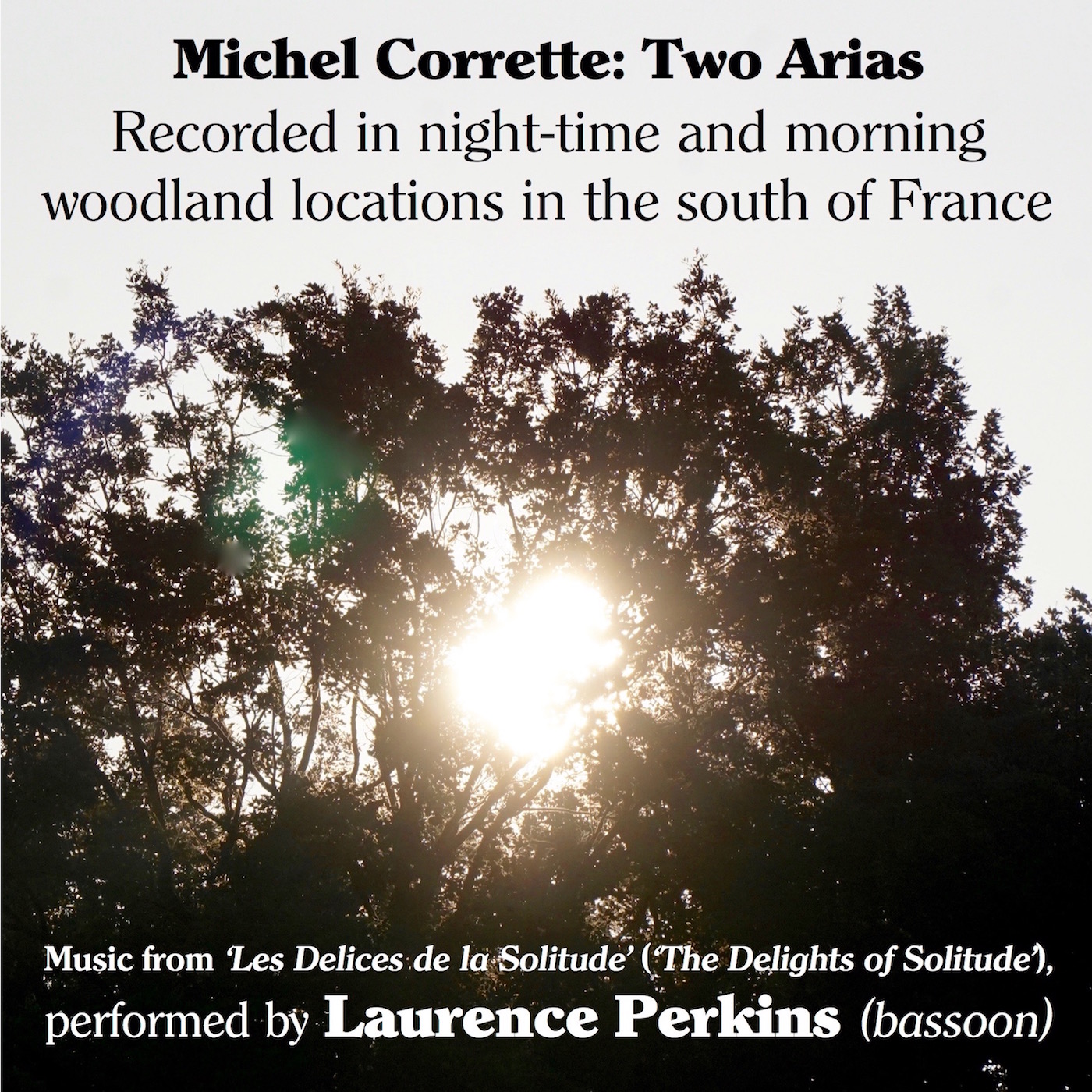 Here we have two Arias for solo bassoon by the 18th century French composer Michel Corrette, performed and recorded in beautiful night-time and morning woodland settings in the south of France. it is an outdoor location performance and recording, made in August 2017. The first Aria has a reflective, slightly melancholy character - the night-time 'soundscape' includes the evocative call of owls. At the end of this Aria, we move gently into a morning setting with birdsong and a church bell, which leads us into the second Aria with its cheerful up-beat character welcoming a new day.

DOWNLOAD an MP3 of the complete audio recording HERE

There will be a few bears around this Autumn! Click DOWNLOAD or CD for another bear encounter, this time with a princess...

Bear Boogie is a fun piece, written by Laurence Perkins - a duet for bassoon (played by Laurence) and contrabassoon (played by Tim Whittick) with tambourine accompaniment (played by Anthea Wood). This is an open access recording, you don't have to buy it to hear in complete, so sit back and enjoy the fun - this is one of many great aspects of bassoon playing - humour and enjoyment! Click below to hear it. 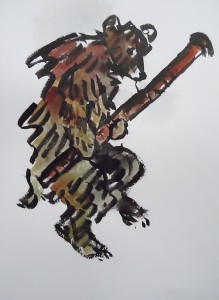 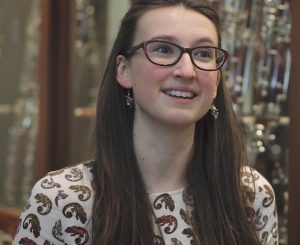 This is the first instalment in the new BASSOON video series, looking at bassoonists from many walks of life, what it means to them and how it influences their life. This short film features Catriona McDermid who studied at Oxford and the Royal College of Music in London, and is now establishing herself as a young professional player. Her enthusiasm and energy for bassoon playing is an inspiration to us all - and especially for young musicians who might be interested in playing the instrument.

'Lamento' and 'Moto Perpetuo' are two pieces for unaccompanied bassoon, written in 1979/80 by the Ukrainian composer Volodymyr Runchak. They are both powerful explorations of the expressive qualities of the bassoon. The first piece, 'Lamento' offers an extraordinary mix of desolation and anger, and the second piece, 'Moto Perpetuo' has an incessant and determined energy. This is a studio recording made in Manchester, U.K. in January 2018. 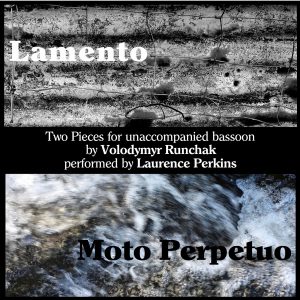 Sample the pieces on this video (click above) and explore a unique and special sound-world!

Download the full recording (both pieces on a single track) for roughly half the price of a cup of coffee! Available from

A special Anthem for the bassoon...

This Bassoon Anthem was the official launch of '2018 - Year of the Bassoon'! The Anthem can either be listened to as a conventional recording, or it can be performed live with pre-recorded backing by either one solo bassoonist or by an ensemble of four bassoons players. The recording and printed music material is being offered on a no-charge access basis.

If you don't play the bassoon...
Simply listen to the complete recording, enjoying all the amazing qualities and character of the bassoon. Maybe you might be tempted to take up the instrument? It can be done at any age, from six years old to retirement age - many people from many different areas of life derive so much pleasure from bassoon playing - and if you're keen to play with others in groups, bassoonists are frequently in demand because there is a shortage of players!

If you do play the bassoon...
You can play this Bassoon Anthem, either as a soloist or with a bassoon quartet, performing to a backing track! Below are PDFs of the solo part and the three accompanying ensemble parts, as well as backing tracks either without the solo line or without any of the bassoon ensemble parts. Have fun with it, and make sure you perform it to others to help pass the word round about bassoon playing!

Here is the full performance with the solo part:

Below is the backing track without the solo part, but with the other three bassoon parts - this is for you to play as a SOLO performance:

Here is the backing track with no solo part and no bassoon ensemble parts - this is for BASSOON QUARTET performance with one player as the soloist:

Public performance, sharing and copyright
Feel free to perform this music as a not-for-profit public performance, either as a soloist or with three other friends in a bassoon quartet playing to the backing track. This is all part of the project's aim to promote the bassoon. All recordings and music can be shared on a non-profit basis, which includes broadcast on established radio, television or other media channels. Please ensure that composer and performers are credited when sharing, performing or broadcasting. This material is copyright - sales or distribution for profit is prohibited, and would constitute an infringement of that copyright. If in doubt, please use the CONTACT form for verification.

Below is a lovely illustration by Catalonian artist
Eva Sanchez Gomez
to celebrate 2018 - Year of the Bassoon!
To see her wonderful work, click HERE. 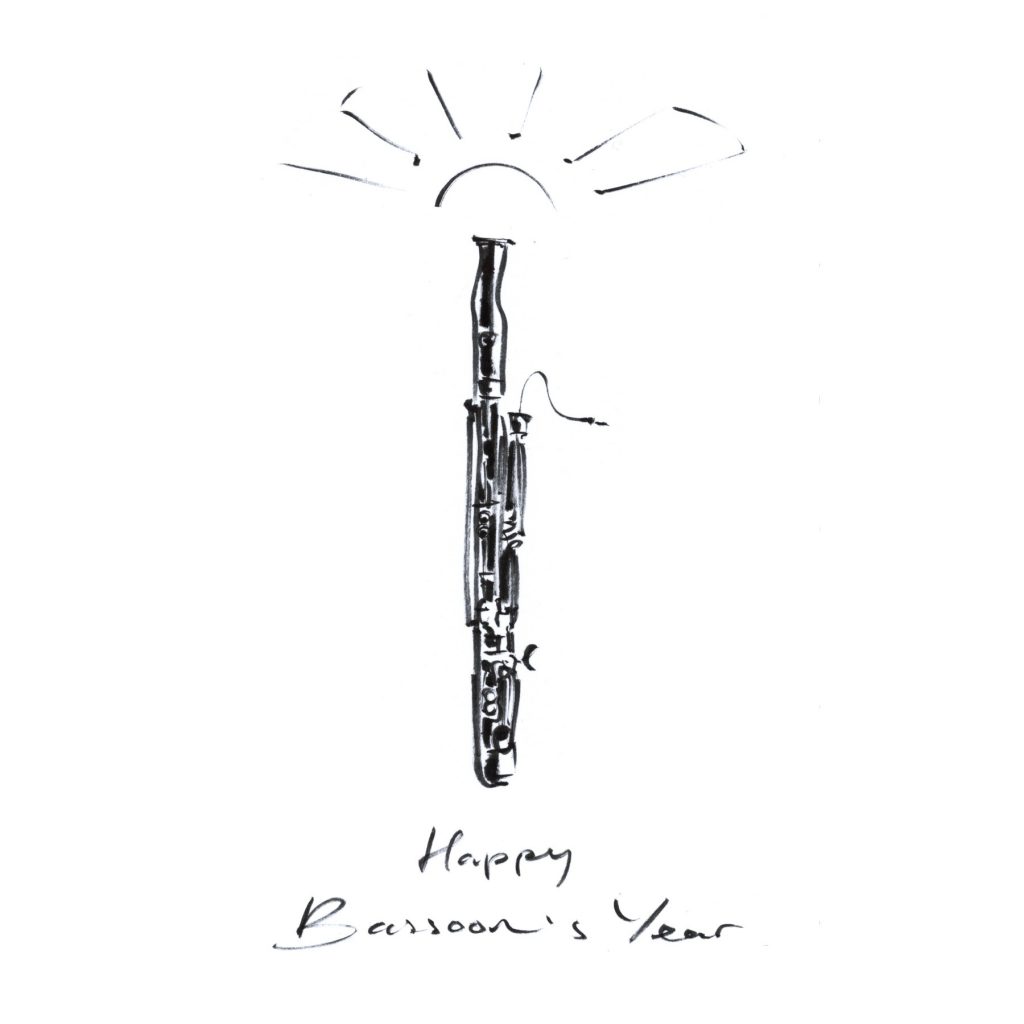 These are the 2018 event details submitted by players and other organisers to help promote the bassoon.

Late December 2017
Cambridgeshire Holiday Orchestra Association, Bedfordshire Music Trust, Oakham School and Duxford Saturday Workshop Trust put on a "bassoon taster" session as part of their Christmas course from 27th to 30th December. 10 children  started bassoon from scratch and had just 1 hour per day to see how far they can get! The sessions were booked out almost immediately after booking opened.

February...
A project link-up with Durham Music Service and Orchestra of the Age of Enlightenment. It involves 14 primary school children aged 9-10 starting on bassoon since mid-November. They played in a performance of the Fairy Queen by Henry Purcell at Durham cathedral.

23rd February: Mannheim, the studies of Max and Moritz , Wilhelm Busch, musicaly illustrated by the mannheim bassoon quartet at the Dalberghaus in Mannheim.

RECORDING Lamento and Moto Perpetuo by Volodymyr Runchak - a new recording on iTunes and CDBaby of this highly dramatic, powerfully-charged piece for solo bassoon. (see above)

Friday 16th March
An evening concert to showcase the bassoon, showing what it can do to a wider audience! The concert is titled Bassoon Classics and is an evening of popular classics arranged for bassoon small ensembles such as Barber Adagio for Strings for 5 bassoons, the Flower Duet for 2 bassoons and the Arrival of the Queen of Sheba for 3 bassoons at St Paul's Church, Birmingham, B31QZ.

June 11 - Timothy Bowers Sonata for Bassoon and Piano at the Royal Academy of Music, London.

24th June in Poznan, Poland
A concert entirely dedicated to the music of Adrian Williams, which included all his bassoon works - My Heart Is Steadfast (anthem.  for SATB choir and solo bassoon), Seven Kilvert Sketches for solo bassoon, Sonata for Bassoon and Piano (Adrian Williams accompanying), Bassoon Concerto 'Spectrum' for bassoon and string orchestra with harp and percussion, all with Arek Adamczek as soloist.

RECORDING - Two Arias for solo bassoon by the baroque French composer Michel Corrette, performed outdoors as a 'soundscape' recording by Laurence Perkins in beautiful night-time and morning woodland settings in the south of France. (download recording - see details and links above on this page)

RECORDING - Bear Boogie, a delightful duet for bassoon and contrabassoon written by Laurence Perkins who joins contrabassoonist Tim Whittick in this recording. (see above)

8th July
An afternoon of music and memories to celebrate the life and work of Alison Pinder (1955-2018), at St Albans. A collection was made for Cancer Research and Rennie Grove Hospice Care.

RECORDING - West Side Story, celebrating the anniversary this month of Leonard Bernstein with wonderful versions of his music. Laurence Perkins is joined by pianist Yoshiko Endo, playing a Baldwin piano that once belonged to Leonard Bernstein!

RECORDING - a new CD release from Hyperion  'The Princess and the Bear'. It features the Duet-Concertino by Richard Strauss (a musical story of a princess and a bear), plus Trios by Beethoven and Glinka. The performers are Sarah Watts (clarinet), Laurence Perkins (bassoon), Martin Roscoe (piano) and the Royal Scottish National Orchestra conducted by Sian Edwards. The catalogue number is CDA68263 and it can be ordered as a CD or digital download from Hyperion <<click this link<<

RECORDING - 'Twilight' by Robin Walker, a 'soundscape' outdoors recording made in the English Lake District, a landscape and its natural sounds that inspired this evocative music. Click HERE to see the YouTube video.

Thursday 25 October at the Royal College of Music, London

As part of the RCM's 'Music and Ideas' series, Martin Gatt, former principal bassoon with the LPO, ECO and LSO, talked about his distinguished career in music, reflecting on his activities across performance, recording, teaching and arranging.

For information on how to book a ticket see http://www.rcm.ac.uk/events/details/?id=1525603

OTHER BASSOON-RELATED TOPICS OF INTEREST

"Floaty Fagotti" trios for beginners Grade 1-3 which work well with several on each part, and "Bassoon Bank" a series of duets aimed at offering ensemble choices for GCSE students. (from Andy Jakob)

A new Chamber Music piece for Double Bass and Bassoon by Alexandre Ouzounoff, “5 Bagatelles“ is just published at Editions DELATOUR this summer. Commissioned by the French Double Bass Association for the Final Master Exam at the Conservatory of Paris in 2017. Duration: 11’45’’ Details HERE