At the top of this page (below the Noticeboard):

This event, originally to have taken place in April 2020, was provisionally rescheduled for 20-24 April 2021, but due to further problems as a result of the pandemic, it has unfortunately been cancelled. Please contact the British Double Reed Society for further details.

At the end of this page:

News, on-line events, links and other information during the present coronavirus crisis 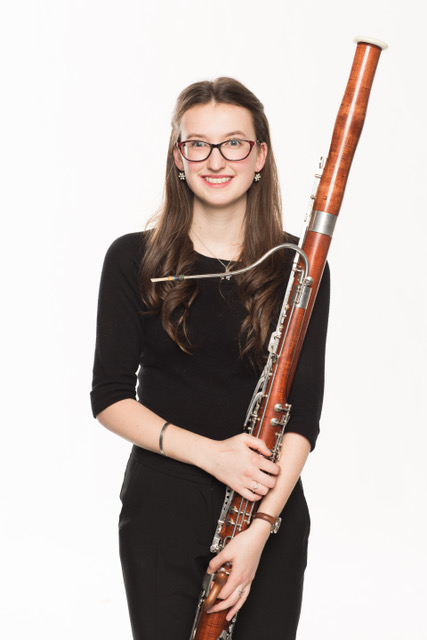 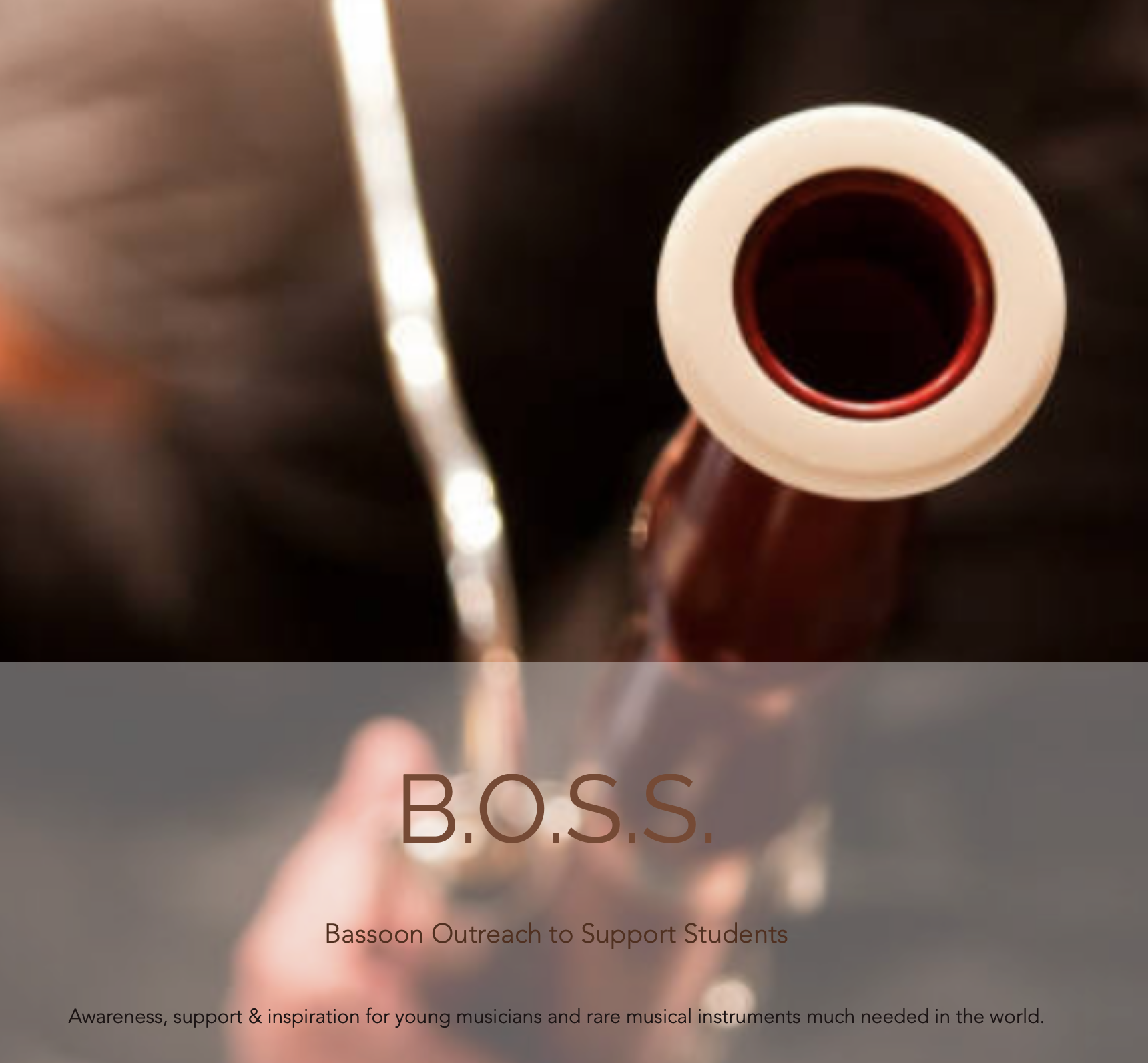 A new composition for your chamber group?

Catriona McDermid is currently pursuing a successful career as a freelance bassoonist in London, but that is proving rather difficult for her and all her colleagues around the world at the moment! Luckily, she is also a fine arranger, and would love to hear from anyone who might be interested in commissioning a new arrangement for your wind ensemble, which would be something to look forward to when you are all able to get together again!

You can hear some of her work - she has arranged the Rachmaninov Prelude in Eb Major for wind quintet (published by Wonderful Winds), and Dvorak Slavonic Dance in G Minor for Piano and Wind Quintet (published by  Airy Publications) - click on the composer name to hear a recording, or the publisher name for sheet music details. If you would like to enquire about something specifically for your ensemble, please send a message via the CONTACT form on this website.

A highly innovative website has recently been launched in the USA, with interesting information about the bassoon and its players. Click HERE to go directly to this website.

John Anderson
(oboe tutor, Royal College of Music)
assisted by Alec Harmon
with thanks to Crowthers of Canterbury (The Oboe Shop) for financial support

Unfortunately, this course has been cancelled due to on-going problems with the pandemic. Please contact BDRS for further details.

Laurence Perkins
(bassoon soloist, and Hyperion solo recording artist)
assisted by Amy Thompson
with thanks to Howarth of London for financial support

Unfortunately, this course has been cancelled due to on-going problems with the pandemic. Please contact BDRS for further details.

Five-day oboe and bassoon residential courses
Two parallel five-day courses for amateur players of all levels who want to develop their musical and technical skills. These in-depth sessions offer the chance to explore

2018 - Year of the Bassoon
On-line audio recordings and videos including
Bassoon Anthem - a multitrack recording of a piece specially composed by Laurence Perkins for the 2018 project
Leonard Bernstein: West Side Story - four songs recorded by Laurence with pianist Yoshiko Endo playing the piano that once belonged to Leonard Bernstein, and may possibly have been used in the composition of this music.
Corrette: Two Arias - recorded on location in woodland in the south of France, with owls, cicadas, bird song and a distant chapel bell
Volodymyr Runchak: Lamento and Moto Perpetuo - two contemporary pieces which explore the bassoon in highly expressive ways.
Catriona McDermid - video of a young professional bassoonist making her way in the challenging environment of professional playing in London

Other past events below... 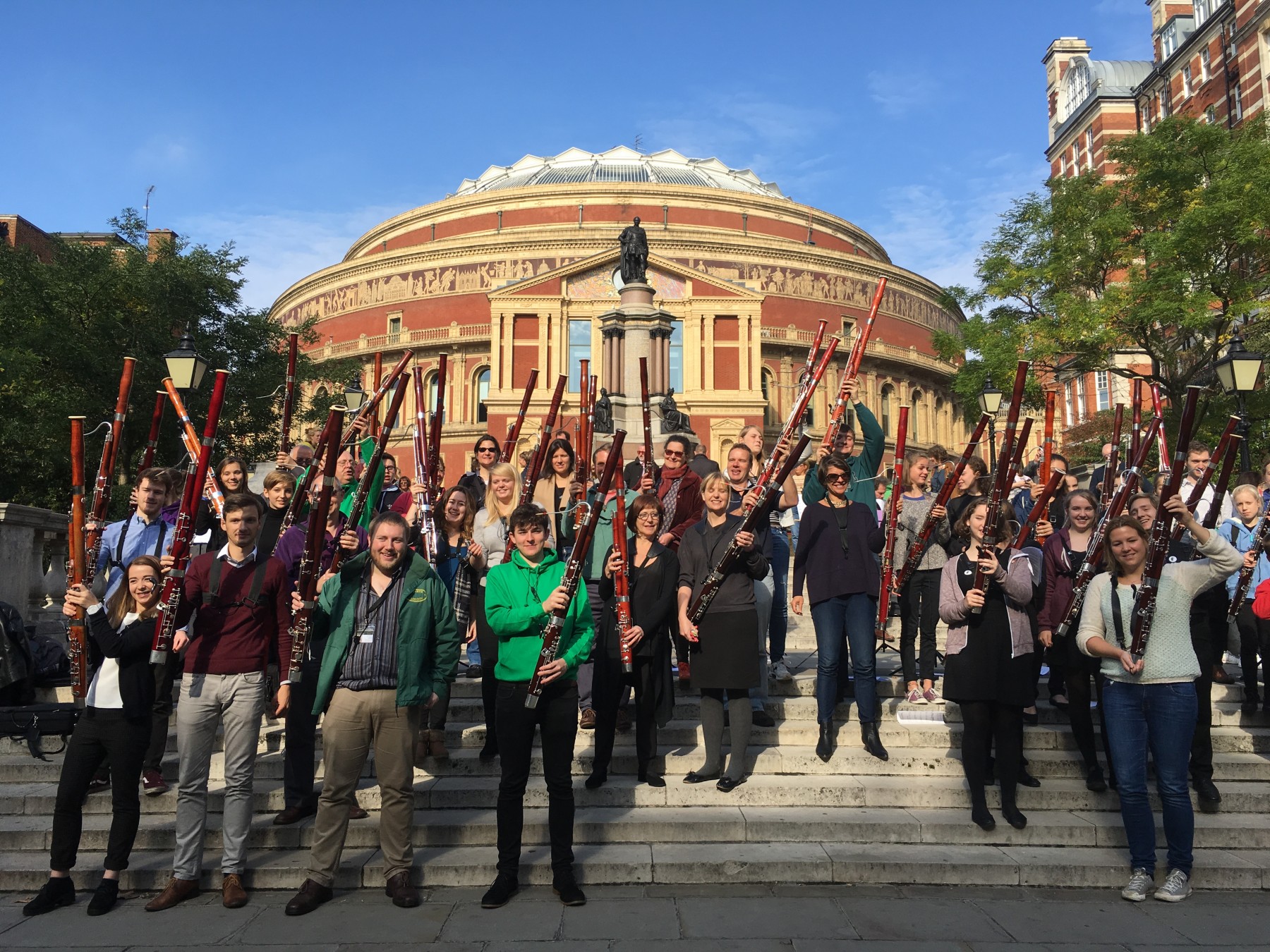 The above photo (by John Durham) was taken on the steps of the Royal Albert Hall, on International Bassoon Day - 38 bassoonists gathered to play Mozart on a beautifully sunny lunchtime. Watch excerpts of the London event on YouTube - click HERE to see this delightful memento of a special occasion!
Martin Jones has also put his own film of the RAH event on YouTube - click HERE to see it.

This was truly an international event - bassoonists all over the world took to the streets and played in public places to raise the profile and awareness of the bassoon. See the Facebook postings by clicking HERE

In the 'Bear-faced Bassoonery' sessions that followed IBD, more than a thousand children discovered the bassoon for the first time, with many having their first opportunity to play this most characterful of all musical instruments. There were also a few who had already taken up the instrument, so the sessions provided an opportunity to discuss the ways forward into advanced studies for those who wish to take their playing further. A few contributed to the sessions with short solo or ensemble pieces - an inspiration for those who were becoming interested in starting to learn.

Sincere thanks to all those organisations - schools, music hubs, colleges and universities - who hosted the events and provided their facilities free of charge, also to the Royal Northern College of Music and the Musicians Union Education Department for providing essential funding for this project. Special thanks also to the retailers (listed below) who provided both funding and valuable practical assistance in the session themselves.

Retailers who supported these events:

Sunday 11th October:
London - Royal College of Music
We celebrated International Bassoon day in style at the RCM last October, led with great style and passion by Laurence Perkins. We have received so much positive feedback from the day. So perhaps the tide is turning, thanks to the advocacy of inspiring people like Laurence.
Simon Channing
Head of Woodwind, Royal College of Music

Monday 12th October:
Dartford Grammar School for Girls (for KentSoundhub)
This was the first time many of these children were going to see and hear a bassoon, and I think it was clear from a quick survey of faces in the room that they were very unsure about what to expect. Laurence was immediately able to get and hold their attention, gaining an attentive and interested audience. This was evident from the number of thoughtful questions he was asked  ... the concert was first-class – I don’t think there’s much chance of hearing better. What was particularly apposite was Laurence’s demonstration of his belief in his instrument and its use for expressive music making. That many of the pupils remained after the end of the concert to ask questions and to look over Howarth’s demonstration stock showed that they had been given cause to think about their own music making.  We were given a top-quality introduction to the instrument, a performance of a quality that is not always forthcoming  in an educational setting and we have four new bassoon players with, we hope, more to come.
Mark Mortimer
Area Leader for Dartford, Dover and Shepway

Wednesday 14th October:
Ealing Music Service
Bear-faced Bassoonery came to us at the most opportune time. We suggested to Laurence Perkins that he deliver the 2 workshops jointly with Yoshi Inada, our own bassoon teacher, and his led to further workshops and the purchase of 8 mini bassoons with a view to piloting tuition in 4 primary schools from September which have all been taken up. Many thanks once again to Laurence for this generous of Bear-faced Bassoonery workshops. Until Bear-faced Bassoonery we had 1 or 2 pupils to whom loaned a bassoon and the Laurence’s workshop proved to be a catalyst for a more strategic approach in which we are specially targeting primary school pupils to embrace this beautiful instrument to come up the ranks and eventually join various orchestras.
Yogesh Dattani
Head of Ealing Music Service / Chair of Music8London

Tuesday 24th November:
South Derbyshire Music Centre
This was an incredibly informative and enjoyable event attended by 120 children and young people, plus an additional 30 parents and friends. From the outset Laurence captured the interest of the audience with his well-paced and thoughtfully-chosen music excerpts and stories.  The event created considerable interest and three players were tempted to change from clarinet to bassoon ... Laurence is a wonderful advocate for the bassoon.
Philip King
Head of South Derbyshire Music Centre

Friday 4th December:
Southampton Music Service
and
Hampshire Music Service
Two quite different ‘Bear-faced Bassoonery’ events were hosted by Hampshire Music Service. The afternoon presentation to the older pupils in the school (Yrs. 4 – 6) was pitched at exactly the right level for this age group. Laurence's use of storytelling, particularly of the Dancing Bear and the Princess, gave a wonderful platform for introducing classical music played on the bassoon. Audience participation and visual props both captured the children’s attention as well as their imaginations. The after-school event, pitched more to the interests of older students and adults, was also very much enjoyed. The workshops have contributed to  a countywide drive to encourage more young musicians in Hampshire  to take up the bassoon.
Sandra Woolsey
Bassoon teacher with the Hampshire Music Service 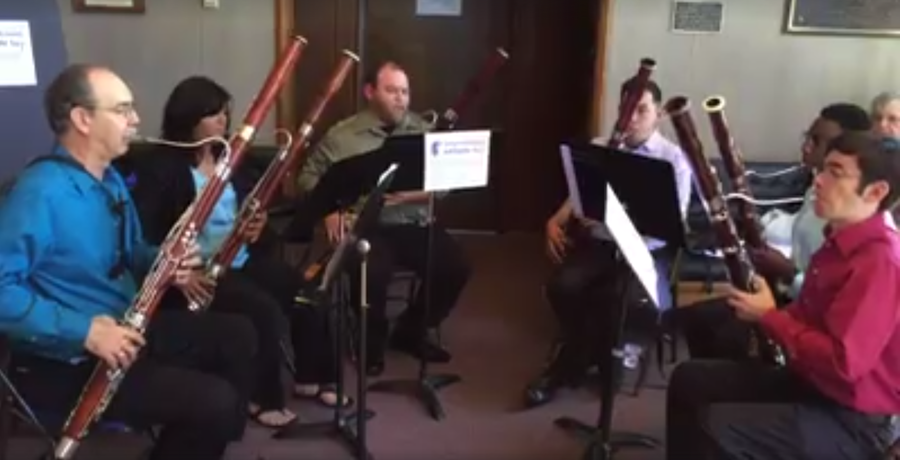 Bassoonists all over the world gathered together on this day to play Mozart, and to let people who are not familiar with the bassoon know what a fantastic instrument it is to listen to and to play. To see some of the contributions from around the world, take a look at the IBD Facebook page HERE

A feature about IBD was the first item on BBC Radio 3's popular drive-time In Tune programme two days previously  on Friday 9th October 2015, and featured four bassoonists from different walks of life. Listen to a performance from that live radio broadcast - the performers are Laurence Perkins, Rachel Whibley, Matthew Kitteringham and Alex Kane.